Visionary College Football Coach and Founder of XA Score. Read more below to discover how Brad McCaslin was inspired to build this groundbreaking digital platform.

SEE WHAT BRAD’S UP TO 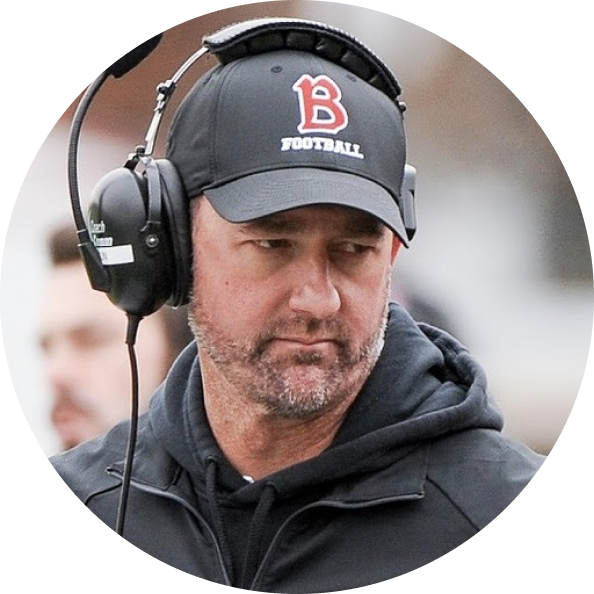 Brad McCaslin began coaching in 1990, his freshman year at Hastings College, working with the Hastings High School Soccer program.  He coached with the program for five seasons.  After a four-year playing career in football, he coached at Omaha Benson High School for two years as an assistant football coach and head soccer coach.  1997 began a 14-year stay at the University of Nebraska-Omaha (UNO) and his career in college football.  From graduate assistant to assistant head coach, McCaslin coached multiple positions on the defensive side of the ball and led Special Teams and Recruiting at different times. In 2005, McCaslin took over as Defensive Coordinator.  The 14 years at UNO was the most successful period of winning in its’s 99-year history, with 13 consecutive winning seasons and 6 Conference Championships.

In the spring of 2011, the UNO Football program was abruptly dropped.  McCaslin and his family moved to Des Moines, IA where he became the Defensive Coordinator for Drake University for two seasons, winning a Conference Championship in 2012.  In 2014, McCaslin became the Defensive Coordinator at Eastern Michigan University, taking on the losingest football program in NCAA Division I FBS football.  After two seasons, Eastern moved on from McCaslin, who then joined the staff at the University at Buffalo.  This reunited McCaslin with the person who toured him around campus on his interview at UNO back in 1997, Lance Leipold.  Several former UNO Mavericks have been part of Leipold’s staff at Buffalo and Kansas University.

In 2018, McCaslin took over as Head Coach at Benedictine University in Illinois.  The program was just finishing a 2-year process of moving up from NCAA Division III to Division II.  Being the only Division II program in the Chicagoland area, secured conference alignment, and a commitment to being successful, this looked to be another potential long run in coaching.  However, shortly after the season began, the University announced they were reversing course and would remain in Division III.  With this decision, McCaslin decided to return to Buffalo in 2019.

XA Score was started in 2020 by McCaslin after stepping away from the college game to concentrate on health and family.  He and his wife, Erin, have three children.  Gabrielle was an All-American and the Illinois Player of the year as a junior in high school and is now a Junior in the Mississippi State Soccer Program.  Kelton, a multisport athlete, and decorated football player is a freshman defensive end at North Dakota State University.  Bodey is currently a junior in high school playing football, basketball and is a thrower on the track team.  He plans to also play college football considering from several scholarship offers.

All three McCaslin kids were or are multisport athletes in High School, just as their parents were.  Being a multiple sport athlete is more and more difficult these days, but something the McCaslin's strongly support in their household.  When a particular sport becomes more demanding of specialized time, the McCaslin's rally around them to help maintain balance and options to compete in each sport. This includes their respective sports in the high school as well.  The role of club sports can make this difficult.  With that said, some of their best competitive experiences have been in the high school setting surrounded by students, community and all the pride that comes with playing for their hometown team.  Not to mention the benefits derived from learning from different coaches and expectations as well as continuously developing competitive athleticism in other areas.

As XA Score was being developed, experiences over a 30 year career in coaching, and with his family have led to one of the core values of the company, Trust.  This is what McCaslin has to say about how that impacts XA Score:

“One of the things about me and as I have gotten older in this profession, I have grown to believe that trust is at the center point of any good team or program.  Keeping that mindset here, as we worked to build this platform, I believe we somewhat accidentally uncovered the best benefit to our solution - We’re using technology to make an impact in personal relationships. We are providing a mechanism for awareness that leads to real communication, understanding, and genuine connection on a daily basis. That has become the best part of all our efforts, which I also believe has a significant impact on team culture and connection.”

I want to personally get to know you and your team’s needs. You can schedule a meeting with me directly with the tool below!